Pop art has been discussed as having many beginnings, however the movement has been most associated with the work of New York artists such as Claes Oldenburg, Roy Lichtenstein and of course, Andy Warhol, among many many others. The pop art movement was, arguably, born from a group of London artists, who called themselves the Independent Group. Members including Edouardo Paolozzi, Richard Hamiliton, critic Lawrence Alloway and others, met on a regular basis to discuss topics such as mass culture and it’s place in fine art, science and technology.

The term ‘Pop Art’ is believed to have a few origins. The first recorded use of the term has been credited to Lawrence Alloway, architects Alison and Peter Smithson and Richard Hamilton, who defined the term in a letter. The first artwork to use the word ‘pop’ is an Edouardo Paolozzi work, ‘I Was a Rich Man’s Plaything’ (1947), which incorporated images of the Coca-Cola logo, cherry pie, a WWII fighter plane, a pin-up girl and a man’s hand holding a pistol, which fired a cloud with the word ‘POP’. 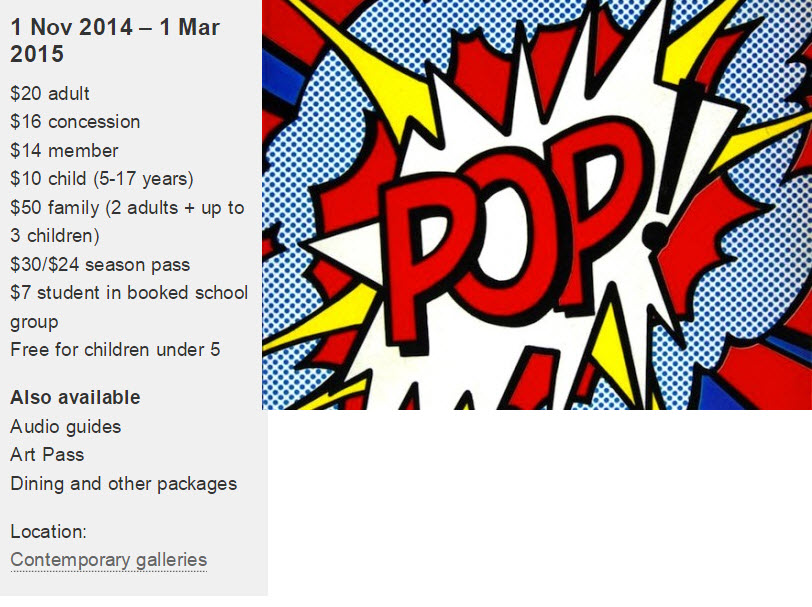 By the 1950’s, Jasper Johns was challenging conventions with his abstract works which included targets, flags, handprints, letters and numbers; referencing ‘things the mind already knows’. Other important artists within the movement were incorporating found objects and images, as well as utilising more traditional mediums such as oil paint. These particular artists were grouped together in the Neo-Dada movement, from which the classic art of Roy Lichtenstein, Claes Oldenburg and Andy Warhol emerged in the 1960’s.

From then on, pop art expanded rapidly in the cultural scene, as all of these new artists incorporated everything advertising, film, music and more importantly consumerism, into their works, in what was seen as a rebellion to traditional art. From the 1st of November 2014 till 1st of March 2015, more than 200 Pop Art works will be exhibited as part of the Sydney International Art Series, at Art Gallery NSW.

‘Pop to Popism’ will feature art from over 45 lenders across the globe, and art lovers can see such masterpieces as Roy Lichtenstein’s ‘Look Mickey’, Andy Warhol’s ‘Triple Elvis’, as well as for the first time, Australian artists including Martin Sharp, Howard Arkley, Brett Whitely and Maria Kozic, who’s works are being exhibited alongside their influences and peers.

‘Pop to Popism' is a fantastic and thought provoking exploration into the origins of pop art and culture, the entire period itself and it legacy in both Australia and abroad.